There is some kind of drama going on .....
This lovely top Actress Mercy Aigbe had on in this photo
is causing some kind of brouhaha..
Read and advice
who needs to be advised.... 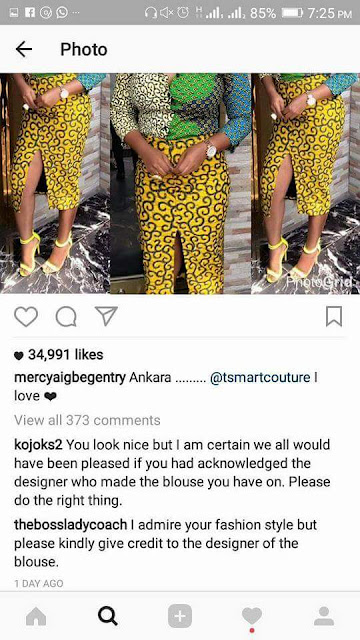 Here's the Story
Hephzibah Funmi Akin-Ajayi @phoonmy_afrika
wrote:
I'm hurt now o.
Sometimes late last year, Mercy Aigbe Gentry had an
agreement with me through another actress to wear
one of our shirts and give the credit to us on social
media.
She sounded so sweet on phone on that day.
Yesterday, she wore it and didn't do as agreed.
I even saw it on Valerie' facebook group.
So I sent her messages on instagram asking her to
do as agree and she apologised saying that she'll fix it.
Today, she blocked me on Instagram,
deleted our messages
and then gave the credit to another fashion designer.
Can you imagine?
She mentiomed the skirt designer but didn't mention
mine.
This Top ... she didn't pay a dime for it.
I contacted our link and she told me Mercy said that
she could return the shirt.
I asked her to return it sharp sharp and she said she's
not even returning again that I should do my worst!
Imagine!
Now Funmi's friends have done all possible to nicely
reach out to Mercy Aigbe Gentry on Ig, asking her to
credit the REAL MAKER of the FREE shirt she was
wearing but instead, she went on a deleting spree,
blocking all who called her out to do the RIGHT THING.
Attached are some of the comments nicely asking
MAG to do the needful but she wouldn't let them see
the light of day.
Mercy ... She whom the gods will kill, they will first of
first make mad, retrace your steps and do the right thing now.
Have you heard about ...
Women Loving Women
Women Supporting Women
Women Encouraging Women
Women Building up Women
Women Advertising Women
Women Standing up for Women.
Return the Shirt Aunty, We will dryclean it and give
or sell it to a worthy person. We are not even giving
you again.
#MercyIwannabelong
#MercyWannabe
#Merciless